C
Posted by Curriculum for Autism

Kirsten is a former special education teacher and mum to 3 young adults. When her son was diagnosed with classic autism at age 2, the pediatrician predicted that he’d never be able to speak or to learn and told her there was no point in trying to teach him anything. Kirsten decided to ignore that doctor’s advice, so using her experience as a teacher and that of her mum, a Pre-School Principal, she began to teach her son to interact, play and speak.

Do you teach students with autism who struggle to be understood when they speak? Are you looking for an engaging, low prep way to help these students develop their speech skills?

I recently bought an Amazon Echo (Alexa) for my autistic son, and I’m amazed by how it is helping him improve the clarity of his speech.

My son usually speaks very fast (he does everything fast), running all the words together, and missing out words in his sentences. He also deletes final consonants in words (eg saying “stan” instead of “stand”). People who don’t know him well struggle to understand him, causing him to either become frustrated or just give up communicating.

He loves listening to music, so I wondered if asking the Echo device to play him music would motivate him to speak more slowly and clearly. Just a few hours after his Echo was set up he was saying “Alexa, play The Beatles” & “Alexa, play Michael Buble” clearly enough for Alexa to understand him. Wow!

In just a few weeks his speech is slowing, his articulation is improving and he is projecting his voice across the room. He can now say “r” clearly because he wants to listen to Diana Ross. And, when Alexa doesn’t understand him, he tries again, and again until he succeeds. 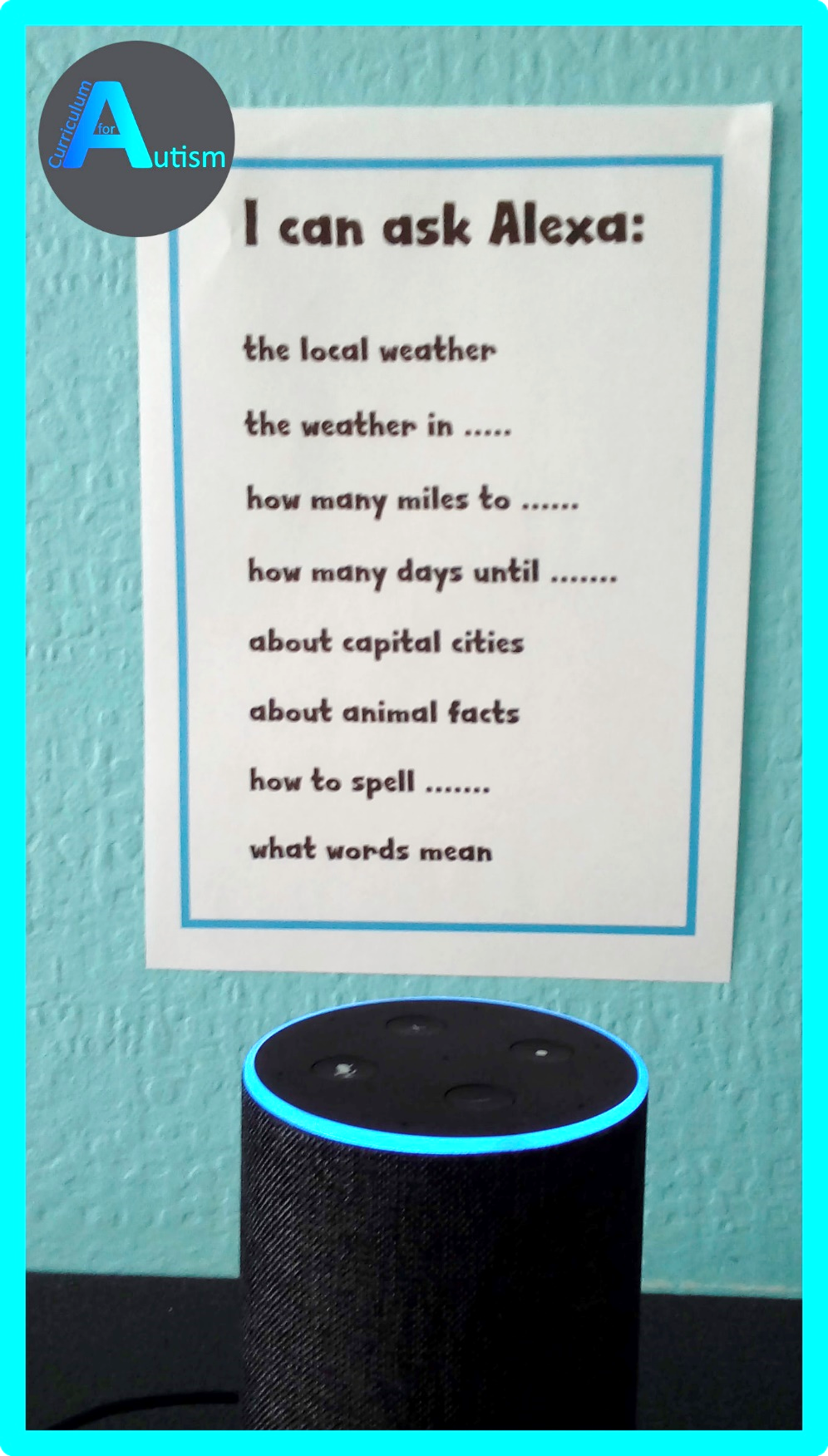 What if your students aren’t motivated by music?

There are lots of other things which they can ask Alexa, depending on their interests, age and ability. Such as:

the weather, the number of miles to other towns and cities, how many days until events or holidays, how to spell words, the definition of words, animal facts, space facts, science facts.

What do you need to consider before using an Echo in your classroom or home school?

Discuss and display your rules first- such as who chooses what to ask Alexa and the need for taking turns, what types of songs are allowed and not allowed, what times of the day can Alexa be used such as during free choice time, reward time or any time of day. Remember to have a backup plan of an alternative activity in case your wi-fi isn’t working.

And, if your students are working on specific speech targets remember to ask for advice from a Speech Therapist.

Here is a link to some of Kirsten’s activities on AutismEducators.com. She offers a wide variety of activities from life skills to reading and math.

Consider sharing this post with others who may find it valuable.

Work towards mastery of IEP goals with creative, engaging, and classroom-tested learning materials. IEP goals included with every product.

Our incredible Education Team Members have decades of experience as teachers or parents, and come from all across the globe.